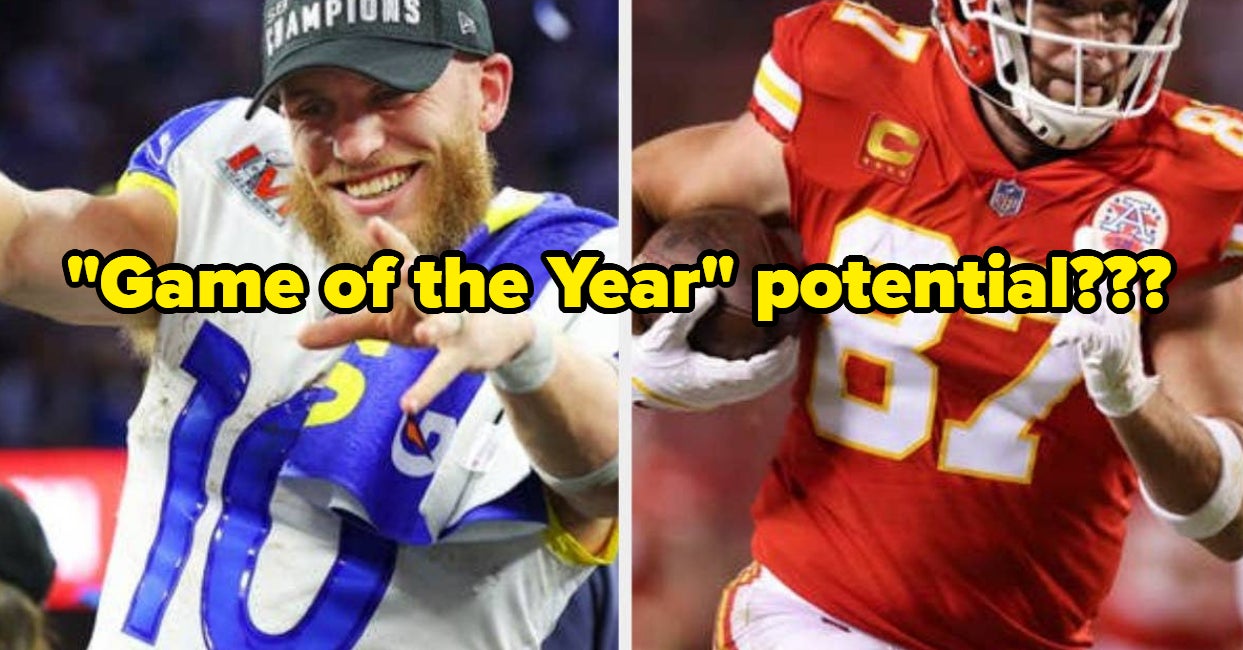 The NFL Schedule Two College Football National Champion quarterbacks, Joe Burrow and Mac Jones, square off in a game that might see both teams on the brink of missing the playoffs. Or, maybe they’re the best teams in the AFC?! OR, both aren’t even in the running.

That’s what makes football awesome! On paper, this game could be a must-watch, but who knows how good they will really be on Christmas Eve.

2022 NFL schedule: Best game each week, from Bills-Rams opener to Tom Brady vs. Rodgers, Mahomes back-to-back
We’ve got all the NFL’s most exciting games of each week mapped out

The NFL has released its full schedule for the 2022 season (here’s a look). There will be 272 games played throughout the regular season, and then 13 more during the playoffs. At the end of it all, we’ll have crowned a champion.

Between now and then, though, we actually have to play all 272 of those regular-season games, which are spread out across 18 weeks. You can find all kinds of schedule analysis all over this site, whether it be our team-by-team schedules, strength of schedule, primetime schedules, event-date schedules, and more.

(Note: We tried to limit the usage of each team so that they appear four times, at most.

Yeah, so this is an awesome kickoff game for the season. We’ve got the defending champs hosting one of the top contenders, on a field that will be absolutely loaded with stars on both sides of the ball. Plus, there’s a bit of an edge with Von Miller playing against the team he just left in free agency.

These two teams played two electric games last season, and considering the talent on hand (particularly at the quarterback position), it seems like that tradition should continue far into the future. Watching Patrick Mahomes and Justin Herbert go shot for shot is going to be one of the great football joys of the next decade. (Hopefully.)

Tom Brady vs. Aaron Rodgers? Yes, please. We’ll have already seen the new-look Packers offense without Davante Adams for a couple weeks before this game, so they’ll have had time to get in a rhythm. These are two of the top contenders in the NFC, so it should be a game that is both very fun and very important.

Yes, the Bucs really do host Aaron Rodgers one week and then Patrick Mahomes the next. Mahomes vs. Brady in a rematch of several momentous games they’ve already played against each other is sure to be must-see-TV.

One of the best games of last season gets run back in Week 5. There’s also a strong contrast between the two offensive attacks, which could make things fun.

This is one of the truly “you have to be in front of your TV for every second” games of this season, and seemingly every season at this point. The Bills and Chiefs played two fascinating games last season, and most NFL fans are still waiting for Josh Allen to get his chance to answer that last Patrick Mahomes touchdown pass to Travis Kelce from the divisional round.

The AFC North looks like one of the strongest divisions in the league this season, and the Browns and Ravens should both be heavily in the mix at or near the top. This matchup pits what should be two of the strongest rushing attacks in the league against each other, so if you like the ground and pound game, you’ll want to tune in.

I would very much like to sign up to watch Rodgers duel it out with Allen up in Orchard Park, NY.

The Bucs get a chance to avenge their playoff loss to the eventual Super Bowl champions, and they get that chance on their home field. Any time you get to watch Aaron Donald and Jalen Ramsey against the GOAT, plus Todd Bowles scheming against Sean McVay, you’re going to want to make sure you’re available.

Can he lead his new team to a victory in his old stomping grounds? I can’t wait to find out.

Kyle Shanahan. Sean McVay. Coaching trees. NFC title game rematch. That diverse San Francisco running game against a defense that it has had a great amount of success in the recent past… up until said NFC title game.

This is one of the most stacked weeks of the season, with awesome games throughout the weekend. This one is at the top of the list, though, because it features the best offensive and defensive players in the NFL, as well as two of the league’s best coaches and many more stars on both sides of the ball.

Brady traveling to Northern California to take on his boyhood favorite team is always a treat. We’re sure to get a whole lot of nostalgia thrown our way for this one. Plus, it should be a fantastic matchup of two terrific teams. Bonus points if Trey Lance lives up to lofty expectations and has the Niners in position to make a playoff run.

Bill Belichick vs. Josh McDaniels. Teacher vs. student. It is ON, my friends.

A showdown between the two teams expected to vie for the NFC East crown, two weeks before the end of the season. Late-year games between the Eagles and Cowboys seemingly always carry great import, and this year figures to be no exception.

It’s very possible that this is the game that decides the AFC North champion.  And it doesn’t hurt that they’re two teams that are extremely watchable regardless of the game’s importance.