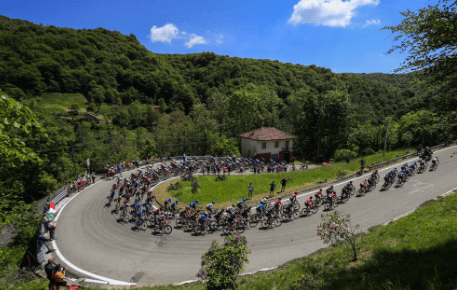 GRUELING The end is in sight. The mountains are almost behind us. One more mountain stage to go. Three tough climbs to go. Passo San Pellegrino, Passo Pordoi and the finish on top of the Malga Ciapela. Heavy, heavier, heaviest. Follow the 20th stage of the Giro d’Italia live from 12:05 in our liveblog or watch on Eurosport and via discovery+.

Richard Carapaz is now so cracked that even Mikel Landa rides past the Ecuadorian again. Carapaz loses almost 1.5 minutes on Hindley and 50 seconds on Mikel Landa. Hindley’s lead seems impossible to overcome in tomorrow’s time trial.
ALESSANDRO COVI WINS STAGE 20
Who is not gone is seen. Well Alessandro Covi was only found after the finish. The Italian wins the 20th stage of the Giro d’Italia.

Jai Hindley rides away from Richard Carapaz. In the final meters that Kämna rides in front of his leader, Carapaz squeaks and creaks. The Ecuadorian has to ride his own pace and sees Jai Hindley leaving, meter by meter. Will the Giro be decided here?
ATTACK HINDLEY
Jai Hindley is the first classifier to try. Only Richard Carapaz can follow the Australian. Mikel Landa does not have the super legs. Hindley jumps to the back wheel of his teammate Kämna who has been riding in the leading group all day. The German can now cycle all the remaining energy out of his body for his leader.

The last climb of this Giro d’Italia. The devil is in the tail. The beginning of the climb is fairly even, but the last six kilometers the gradient no longer drops below 10%. That’s going to hurt. Alessandro Covi is the first rider to start with a 2:20 lead on the chasing group. The peloton still follows at six minutes.

THE PLAN OF LANDA

What is Mikel Landa’s Plan. The Spaniard is 1:05 behind rosette jersey carrier Carapaz and meanwhile almost the entire Bahrain-Victorious team is riding at the head of the peloton. Is today the day that there will be time differences on the final climb between the three podium contenders of this Giro?

With 30 kilometers to go and one big climb, everything is still possible in this 20th stage! Alessandro Covi is alone in the lead with eight men behind him at 1 minute and 50 seconds. The peloton follows at six minutes. So everything is still possible in this last mountain stage!
CIMA COPPI
The Cima Coppi is the name that the “roof of the Giro” gets every year. The highest climb of the Tour of Italy that year. In this 105th edition it is the Passo Pordoi. The first rider to arrive at the top is again a UAE rider. This time it is Alessandro Covi. The Italian rides alone in front. At one and a half minute behind follows the now depleted front group where Leemreize, Oomen and Arensman are still present. Only one more climb to go this Giro!

The roof of the Giro! 11.9 kilometers with an average gradient of 6.6%. The first victim of the climb: Mathieu van der Poel. Is he really taking it easy and is he saving himself for tomorrow’s time trial?
ARENSMAN ALSO IN THE BREAKAWAY
Thymen Arensman’s assignment for Saturday was not to jump with the escapees. “The team agreed something different with me,” said Arensman, who now shows up at the front nevertheless. Just like Mathieu van der Poel, the Dutchman does not seem to be carrying out the proposed plan.

Davide Formolo is the first rider of the day on top of the Passo San Pellegrino. The Italian doesn’t have to compete for the mountain jersey anymore. Koen Bouwman can no longer be caught. Will there be water in the bottles that the soigneurs give to the riders on top of the climb?

DJOKOVIC TURNS OUT TO BE A CYCLING FAN

The Giro d’Italia had a special spectator on Friday. While warming up for his match in the third round of Roland Garros, Novak Djokovic could not take his eyes off the screen on which the race was broadcasted. Coincidentally, big fan of Domen Novak in the lead group?
THE REST DAY OF MVDP
Mathieu van der Poel said earlier this week to focus on tomorrow’s time trial and to “take it a little easier in the coming days.” With most time trial specialists now out of the race, that’s not such a crazy idea. But whether being in the breakaway of the day is the right preparation?

LAST CHANCE FOR THE ESCAPEES

Today is the last chance for the breakaway riders to take a stage win. Not surprisingly, half the peloton wants to be in the breakaway. Yet it seems that 14 riders managed to break away. The Netherlands are well represented with Van der Poel, Leemreize, Oomen and Arenman in the breakaway.

KILOMETER 0
We’re on our way, today the Giro d’Italia will be decided! Right?
PREDICTOR
Who will be first at the top of the Fedaia and win the queen stage? Our experts give their prediction.

The victory of Koen Bouwman in the nineteenth stage of the Giro d’Italia has received the blessing of Quick-Step. Bouwman told this in his blue jersey before the start of the leaden stage 20.

The twentieth stage of the Giro d’Italia takes the riders from Belluno towards the Passo Fedaia. For 168 kilometers, the peloton winds over and through the Italian Alps. Along the way, they encounter the Passo di San Pellegrino and the Passo Pordoi.
The finish is atop the Passo Fedaia. The final climb is 5.4 kilometers long with an 11 percent gradient. So that’s going to hurt a lot.

Koen Bouwman, meanwhile, only has to finish to take home his blue jersey. In terms of points, the Dutchman can no longer be overtaken.
This is the last chance for a breakaway group to make a bid for a day’s victory. So we can expect a big fight to get in that breakaway. A spectacle from start to finish. That’s where the final weekend of this Giro begins.